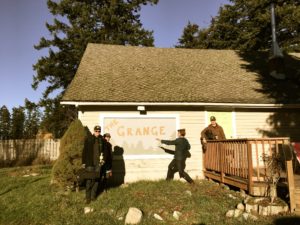 Winter is here, and the days we recently spent on Orcas Island, WA were clear and COLD! But I’d take sunny and cold over rainy and cold any day! It was perfect weather for sitting fireside in the evenings at Polly’s house, (Caleb’s mother), and perfect weather for cutting a new album. We spent a few days in the land of Caleb’s rearing, and recorded within the rounded walls of the Orcas Island Grange Hall where many community events of Caleb’s childhood were held, including a notable performance by Emmy Lou Harris and Ricky Skaggs. Though Caleb was merely a baby and didn’t attend the concert, a bootleg tape made its way into Caleb’s hands later in life, and was indeed influential. It was half the performance, and half the sound of that room on tape that was inspiring I think. That room has a sound unique to itself, and one that is recognizable to me after hearing that tape many times over the years. It has a woody warmth, and a gentle 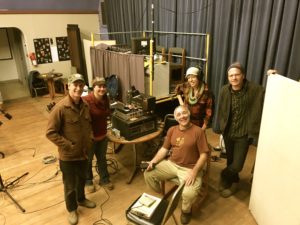 Our pal Bruce Harvie, who lives way out on Orcas, brought his gear over to the hall, cleared away the theater seats, and set up a bunch of his vintage mics in the middle of the room. It was his idea to record there actually. He said, “it’s one of the best sounding rooms you’ll ever hear.” We set up Monday evening, tested the mics, cut a few tracks to get our sound dialed in, and then started in for real on Tuesday after lunch. Two full days in the hall with Bruce at the helm, and we had what we needed. Our new manager Matt Morelock was on hand to smile, help out, give feedback, and generally keep spirits high. We are also very grateful to have had the company of my folks, Norm and Bobby Willms,

who graciously accepted our request for a cheap cook and bottle washer, and an intermittent audience. Bobby kept us well fed, and Norm listened in at the hall, kept the home fires blazing, and the Bushmills flowing. It was truly a blessing to come home to a cozy house smelling thickly-good of dinner! And my ma makes some of the best apple pie around! And she never lets a meal go by without a lengthy and news-filled blessing. Leave it to say, it was a pleasure getting to record in that setting. It was relaxed & fun, felt creative, and after all was said and done, we spent time mixing back in Bruce’s studio are really happy with the results. I think we got a great mix of songs and tunes that you will enjoy. It is an album true to Foghorn’s legacy, and yet offers a variety of material and sound that is unlike any previous album. We’re not quite sure what the release date will be, but you can be sure we’ll be letting you know!

We did a Northwest Tour this early December, leading up to the holiday season. It seemed like it had been awhile since we had toured in the region. Since Sammy and Nadine have been living in the Yukon, we have no longer been a local Portland band. And now, they have purchased their very own house in Pointe-à-la-Croix, Quebec, so it felt extra special to all be in and around the Pacific NW for a couple of weeks. They now live in Nadine’s hometown, right down the street from her folks and extended family. They seem thrilled to have made the move, and to have their own little home. 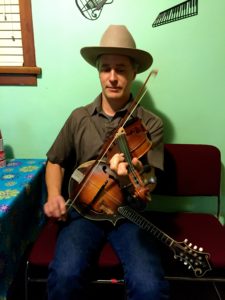 Our NW Tour began with a weekend in Canada: Vancouver, Victoria, and Quallicum Beach. The Canadians were in top form, all great audiences! Thanks to the Rogue Folk Club, the Victoria Bluegrass 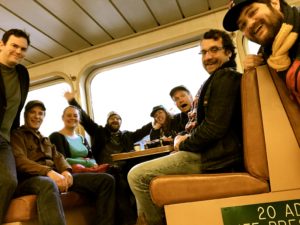 Association, and Joyce and John Beaton. We crossed the water and the border by ferry over to the San Juan Islands, and spent those few days on Orcas, working on a new recording. While changing ferries in Friday Harbor, we ran into our buddies from Louisiana, The Revelers! They were only passing through, though we tried our best to convince them to stay the night. We managed to grab dinner and beers with them at the Lower Tavern on Orcas before they had to press on. 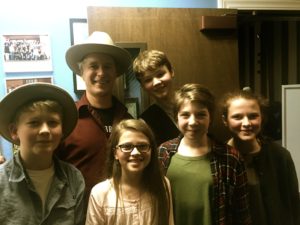 Our Washington dates included The Conway Muse, in Conway, WA. We played a dance and concert there with square dance caller, Charmaine Slaven. We went to Olympia for a concert and workshops at Arbutus Folk School where our young buddies the Bow Weevils opened for us. Those are some talented kids who are carrying on the old time music tradition! Thank goodness. We taught workshops the following morning. The Folk School is doing some great work there… lucky Oly. We busted back north for a concert and dance in Seattle at the Royal Room. Squirrel Butter opened the show, and Charmaine Slaven called the dances. We continued north to Bellingham for the Bellingham Folk Fest. This event is in its third year or so, and it’s a sweet small festival that is structured with a large daily workshop schedule, followed by evening concerts, and late night dances and downtown shows. We played a downtown show at the Green Frog, and as usual Bellingham made a good rowdy showing. We made a stop on our way south to play the Monday Tractor Tavern Square Dance, a dance started by Charmaine Slaven years ago. Our good friend Lucas Hicks joined us on the banjo for the evening. 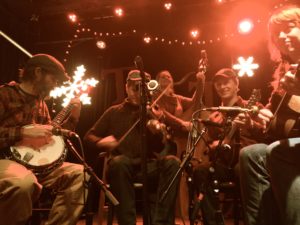 The last leg of our tour was in NW Oregon. We had a cancelled show in Bend, due to 20” of snowfall. So we stayed home by the fire for a night, and didn’t mind a bit to sit still fireside. We played a house concert in Hood River, at the mayor’s house. We shared a very special evening with legendary Irish fiddler, Kevin Burke at the Doug Fir Lounge in Portland. It

was magical as usual to play with Kevin. Not only is he completely charming and full of jokes and stories on and off the stage, but he is a heck of a musician! He has truly cultivated a touch for the fiddle that most will never attain. It is powerful and he had the audience, and ourselves wrapped around his little finger during his set. We joined him on stage for a couple of tunes, and then played a set ourselves, bringing him up to join us for a grand finale. Our show in Eugene was at the Wow Hall. It was a quiet Saturday night in Eugene, but the folks that showed up were a good bunch. We shared the bill with local band, Breaker’s Yard. The tour finished on home turf with the Every Sunday Square Dance in Portland, followed by a good old late session at the Moon and Sixpence. It was delightful to see many old friends out that evening and we always love to play our old session at the Moon.

It won’t be long before Foghorn is all together again in the PNW. Coming up in January, Foghorn will perform at the Portland Old Time Gathering, and will also be teaching a 3-day workshop in Blodget, OR with Eli West. We also have a few dates in Southern California toward the end of January. Then we’re off to the southeastern US in February for a tour through Nashville, TN, Asheville, NC, Knoxville, TN, and Boone, NC. We’ll be at the Midwinter Festival in Denver, CO, and then Wintergrass in Bellevue, WA! Fun times ahead. But for the near future, we are looking forward to some much needed time at home for the holidays! Hope you all have cozy holidays, and a Happy New Year! See you in 2017!
– Reeb Willms