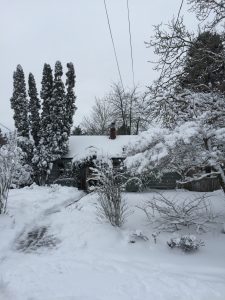 I guess it’s been since before the holidays that I last wrote. I don’t need to tell you how time flies. Our winter has been busy, and continues to be so into spring. Caleb and I did a few shows as a duo in the Bay Area in early January while Sammy and Nadine spent some time at their new house in Puente de la Croix, Quebec. We met up in Portland for the Portland Old Time Gathering, a festival of traditional old time music that’s now in its 16th year. It’s always a good time where many friends converge, we stay up too late, and play a lot of music. Portland had a rare moment of heavy snows that stuck around for nearly a week, so much to our delight, it was a winter wonderland outside. 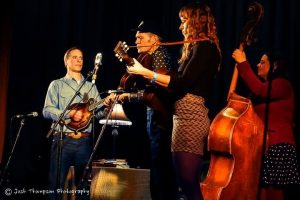 We’ve been hitting the bluegrass circuit this winter, starting with Blythe, CA in late January, Midwinter Festival in CO, and Wintergrass in WA at the end of February. We played a fun show at Timewarp Records in LA, and also participated in a musical film project headed by David Bragger documenting roots music traditions. Keep your eyes peeled as it comes to fruition in a couple of years, as it will have some great footage of some legendary players. 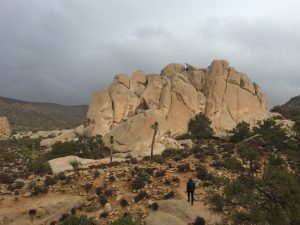 None of the band had ever been out east of LA, so we took our opportunity to hike in Joshua Tree on our way back to the city after Blythe Bluegrass Festival. Blythe was unseasonably cool due to the storms that had been blowing in, so we actually had to wear jackets, and didn’t get to work on our tans at all. We did get to wear some symbolic matching t-shirts on the day of the Women’s March, which happened during our time at Blythe Bluegass. In our own little way we could stand for human rights and women’s rights and acknowledge all the work to that has been done and is yet to be done to make our world a place of equality & respect. Many folks at the festival thanked us for wearing those shirts.

In February we all flew to Nashville for a short tour from there to Boone, 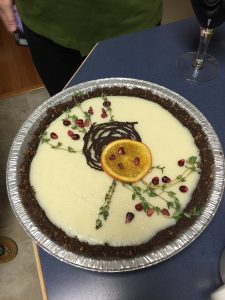 NC. We played on Music City Roots, made it over to Asheville for a great evening at the Grey Eagle with our pals Bill and the Belles, and stopped off for some radio spots along the way at WDVX in Knoxville, TN, and WNCW in Spindale, NC. It’s always fun to play on the radio… you just send the music out there on the airwaves, and who knows who’s out there tuning in? We played the Laurel Theater in Knoxville, and finished up with a concert and workshops at the Fiddler’s Convention at Appalachian State in Boone, NC. And, a sweet and generous fan brought us one of the most beautiful pies I have ever seen.

Back on the West Coast we met up with our Cajun buddies Joel Savoy and Jesse Lege, for a run as the Cajun Country Revival. In the Bay Area, we played a dance at Ashkenaz in Berkeley, with our pals Suzy and Eric Thompson, and a wonderful concert the following night at the Freight and Salvage. It’s always a pleasure to collaborate with Jesse and Joel. They are both musicians whose music I love and respect, not to mention they’re just plain good humans. I feel privileged to play on stage with the both of them, especially Jesse, living legend of the Cajun dance halls. He’s one of the only musicians from that hay day out touring and playing traditional dancehall music. He’s as pure as they come, and if you’ve ever heard him sing, you know what I’m talking about. It gets you right there…uh-huh! Man knows how to move a dance floor. We played concerts in Seattle at the Royal Room, Vancouver at the Rogue Folk Club, and Portland at the Secret Society Ballroom

Foghorn reconvened in Denver, CO for a fun weekend at the Midwinter Festival. We really didn’t set foot outside of the hotel the whole weekend! Par for the course for a winter hotel bluegrass festival. We had a great time meeting folks there, and making some new friends and fans.

We spent the following week down in rural Blodgett, OR teaching music at House Camp. It is a wonderful small music camp in its seventh year running, started by a mother and daughter after the passing of their husband/father in the interest of bringing joy back into the house. I think they succeeded! Students and teachers alike had a fabulous time, played a ton of music, ate delicious home cooked food, and made new friends. Each day’s curriculum was planned over breakfast, and great care was taken to create classes and lessons tailored to the students in attendance. The camp culminated with a concert at the Summit Community Center, a dear small old church converted into a hall, featuring performances by the students and teachers. It seemed that everyone gained a lot through the experience and I, for one, left feeling very inspired.

Many in Blodgett continued on the pilgrimage up to Bellevue, WA to attend the Wintergrass Festival. Foghorn played a concert and a dance, both of which were well attended. We played tunes in the hallways, stayed up late, and had a great time seeing many friends there. It was our first time at Wintergrass as the Foghorn Stringband, and it was wonderful to be there at last. I must say, between Blythe, Midwinter, and Wintergrass, a shout out to our bluegrass audience: thanks for being awesome! We are really enjoying meeting you all, and can feel the love coming from you when we are on and off the stage!

Next stop was Minnesota, Sammy’s homeland. We flew out there just at the 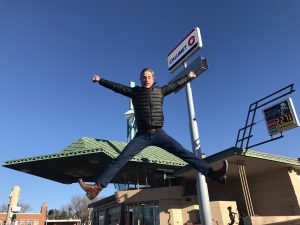 beginning of March to play at the Minnesota Bluegrass and Old Time Association’s Winter Weekend. We converged again with Joel Savoy and Jesse Lege to make a stops in Madison, 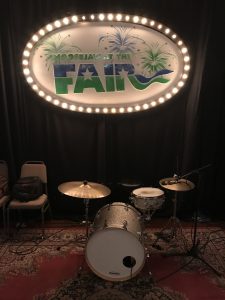 Cedar Rapids, and Duluth on our way up to colder northern climes to perform at the Moosejaw Festival at the Mapelag Resort near Callaway, MN. On the way, we stopped at the one and only gas station designed by Frank Lloyd Wright. Combine nordic skiing, a wood fired sauna near a hole in a frozen lake 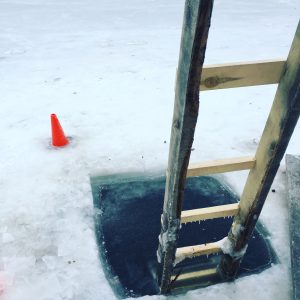 , a weekend of music, dances, and workshops, and you’ve got yourself a good time! Our good buddy Caroline Oakley was there too, hired on as the guest square dance caller. We tried our best to get the Cajuns to jump into the hole in the ice, but that’s about like trying to get a cat into a bucket of water. 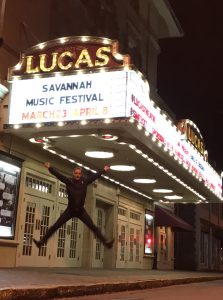 We are just returning from performing at the Savannah Music Festival in Savannah, GA. It’s a phenomenal 17 day festival with an eclectic lineup. Foghorn played a sold out show with Dom Flemons, and the next day Caleb and I did a lunchtime set as a duo. Savannah is a lovely town with tons of history, beautiful architecture, and countless garden squares filled with live oaks hung with spanish moss. It was summery there compared to the PNW or Eastern Quebec! The weather was so sunny and warm, that we found ourselves basking in the sun and jumping into the outdoor pool at the hotel after our sound check. Making a set list pool-side, now I could get used to that. Sammy and Nadine returned home to several feet of snow, had to shovel the walk and fire up the wood stove!

Next up, Sammy will be away in England for a week, teaching fiddle at the Sore Fingers Music Camp. Foghorn will reconvene on the east coast in late April to perform at the Kanawha Friends of Old Time Music and Dance event in Charleston, WV, and to be in Rockport, MA the following week for performance and school residency put on by the Shalin Liu Performance Center. Then it’s off to Ireland, UK, and Bavaria for the month of May! Don’t know if I’m coming or going sometimes, but who could complain? We will return to the Baltimore Fiddle Fair in SW Cork, one of our all time favorite festivals, and we will also be at the Féile na Bealtaine festival in Dingle. Then we’ll be in England & Wales the rest of May with short jaunts over to Germany and Denmark in the middle.

and then joining Reeb on a NE tour with the Caleb Klauder Country Band in RI and MA before heading back to the good old NW for the National Old Time Fiddler’s Contest in Weiser, ID. Toward the end of June, Caleb will be hosting the Great Big Fais Do Do, gaining momentum in its 4th year, a dance and music festival featuring roots country, cajun, bluegrass, and old time music in a dance setting in NE Portland, OR.

Sammy and Nadine will be up in the Yukon in June teaching and playing music for a week before we all reconvene at the beginning of July in Port Townsend, WA for the Festival of American Fiddle Tunes, where Nadine will be patiently tutoring budding bass players, and the rest of us will be roving musicians, playing for dances and helping with classes. Fiddle Tunes is truly an amazing convergence of musicians and friends from all over the place, representing many fiddle traditions from around the country and beyond. If you’ve never been, you should go. The faculty, performances, and dances are not to be missed.

So, that pretty well gets us up to speed. Wishing all of you a wonderful spring ahead and hope to see you down the road!